skip to main | skip to sidebar

[The following is an article that I was asked to write for BeNotAfraid.net, an online resource for parents who get prenatal diagnoses of various scary medical conditions. It's a great site with many moving and encouraging stories.]

Halfway into our second pregnancy, my wife, Ellen, and I were alerted that our unborn child had certain “abnormalities.” The doctor doing the ultrasound pointed out physical markers that seemed to indicate possible club feet, cleft palate, problems with the spine and vital organs. He suspected Trisomy 13 or 18, genetic conditions that were “incompatible with life.” He told us, “Based on this information, you can decide to terminate the pregnancy.”

We were stunned. Our first pregnancy had had no problems, and we had delivered a healthy son, Josiah. What had gone wrong this time? Would we be planning for a funeral rather than a birth?

We had an amniocentesis done, at which point they confirmed that our son would have Down syndrome, Trisomy 21. On the one hand, we were relieved that this was not as serious as the other more life-threatening conditions. On the other hand, we still faced uncertainty, likely many medical challenges, perhaps a lifetime of special needs care. We talked with a colleague who has a granddaughter with Down syndrome, and he mentioned that his first reaction was that his daughter and son-in-law may never have an empty nest. We also heard a statistic that about 90% of couples who have a prenatal diagnosis of Down syndrome choose to terminate.

We are prolife Christians, and our default ethic is to “do no harm.” We were not inclined to abort our child. But what would it mean to bring our son to term? What would it be like to raise a child with special needs? We had no idea.

We started reading books and resources about Down syndrome. We learned that about half of all babies with Down syndrome have heart conditions that require surgery. We read about the physical and mental challenges, the developmental delays, the need for early intervention and ongoing therapies. It was overwhelming. But we also learned that life with Down syndrome was not as scary as we had initially supposed. Because of better care and medical knowledge today, most people with Down syndrome can expect to have long and fruitful lives.

While learning about all of this, it occurred to me that many children throughout history in various cultures around the world had been abandoned because of having special needs. Orphanages in China and many other countries continue to take in unwanted children, and there are never enough adoptive families to meet the need.

Historically, Christians were known for rescuing abandoned babies and raising them as their own. In the early centuries of the church, Christians practiced love and hospitality, welcoming little children into their homes that would otherwise not have survived. Others said of these Christians, “They alone know the right way to live.” Their testimony of lives of compassion showed the world that God was real. Their love for the abandoned and marginalized was a concrete sign of God’s love for all of humanity.

Ellen and I realized that we had the same opportunity as those early Christians to demonstrate that same experience of God’s love. If our son had been born in other circumstances, he may well have been one of those unloved, unwanted children. He could have been abandoned along the side of a road, or thrown into a river to die. As prolife Christians, how could we not welcome this child? Come what may, regardless of whatever challenges were in store, we understood that welcoming our son was a God-given opportunity to practice the same kind of hospitality and love that Christians throughout the ages had been known for.

Even though we were already inclined to continue the pregnancy, we made a conscious choice to bring him to term and welcome him with all love and care. While he was still in utero, we decided to name him so that he was not merely an abstract concept but a named son, a real person. So we gave him the name Elijah Timothy – Elijah being a Hebrew Old Testament name meaning “The Lord is God,” and Timothy being a Greek New Testament name meaning “one who honors God.” It was our prayer that his life would honor the Lord our God, and also that we and many others would learn to love and honor God through our son’s life.

Elijah was born three weeks early on April 8, 2005. He spent several weeks in the neonatal intensive care unit as he adjusted to life on the outside. Many of the initial fears proved unfounded – he had no major organ defects, club feet or cleft palate. A minor heart valve issue resolved on its own, and the only surgery he has needed was for ear tubes. Life has been a bit more complicated than usual with multiple doctors and therapists and whatnot, but nothing unmanageable. We now cannot imagine life without Elijah. 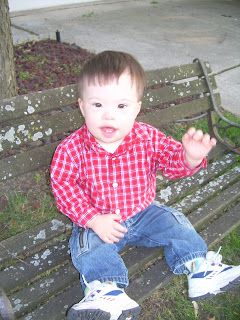 As I write this, Elijah is a rambunctious two-year-old toddler who is always on the go. He loves to watch his Signing Time DVDs and communicates with us through a vocabulary of dozens of sign language words. He pages through his board books and signs words for pictures he recognizes. He sat in my lap briefly as I typed this, gave me a hug, smiled and laughed before scurrying off to play.

This Father’s Day, I am grateful for the gift that God has given our family through our son Elijah. It is not exactly the life we had anticipated or expected, but it is a life of joy and blessing. As we grow in our love for him, we are delighted to see his love and affection for us. And if we mere mortals have such love for our special child, how much more must God’s immeasurable love be for us! Elijah’s presence in our lives is a visible reminder that all life is sacred and that all of us are beloved by God.
Posted by Al Hsu at 9:08 AM

such a beautiful entry and I really enjoyed reading it. I also have a child with special needs, however his needs were not apparent until age 18 months and on. Our family also uses the Signing Time dvds in our home, they are just outstanding. Signing has been an amazing tool for my family.

This is such an awesome story. I'm so glad that you made the right choice, and listened to God. This is an amazing testimony to anyone who might be faced with a similiar circumstance!

Beautiful entry. I am the mother to a 15 month old son with Down syndrome and also declined to terminate after recieving a positive pre-natal diagnosis. Thank you for sharing your story. I always enjoy reading entries from a Father's side of the story.

Thanks for sharing this, Al. It is beautiful.

My 24-year-old daughter Sarah is a twin; she has Down Syndrome. She has taught me that we're all retarded--it's just a matter of degrees. I blog about her often. Not because of her disability, but because she has an exceptional A-bility to see goodness. She reminds me to open my eyes to it as well.

Al Hsu
Hi, I'm Al Hsu (pronounced "shee"), also known as Albert Y. Hsu. I'm married to Ellen Hsu, and we're the proud parents of Josiah and Elijah. I'm an acquisitions and development editor at InterVarsity Press, working with authors and books in such areas as church & mission, global justice issues, spirituality and cultural engagement. Ellen and I are members of Church of the Savior, an Anglican church in the western suburbs of Chicago. I'm the author of Singles at the Crossroads, Grieving a Suicide and most recently The Suburban Christian: Finding Spiritual Vitality in the Land of Plenty. I've served as a columnist for Christianity Today magazine, and I'm also a PhD student in educational studies at Trinity Evangelical Divinity School in Deerfield, Illinois.

links related to me and my writing